Vaginas depicted in Sumerian: a database with commentary

This is the Sumerian word for “woman,” rotated 90° clockwise. During the development of their writing, the Sumerians rotated everything counter-clockwise by 90° for reasons no one knows. Perhaps it was a simple form of encoding: the rotation makes it more difficult to see what the inscriptions resemble.

According to the Pennsylvania Sumerian Dictionary1, the above triangular character means “woman” at least 3,079 times, starting in Early Dynasty IIIb, which Wikipedia gives as 2,540-2,350 BCE. This means that more than three thousand times a vagina stood as a representative of “female”—not just “woman” because female lamb has a vagina: 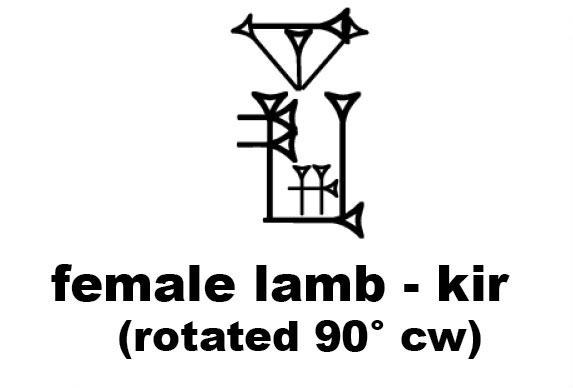 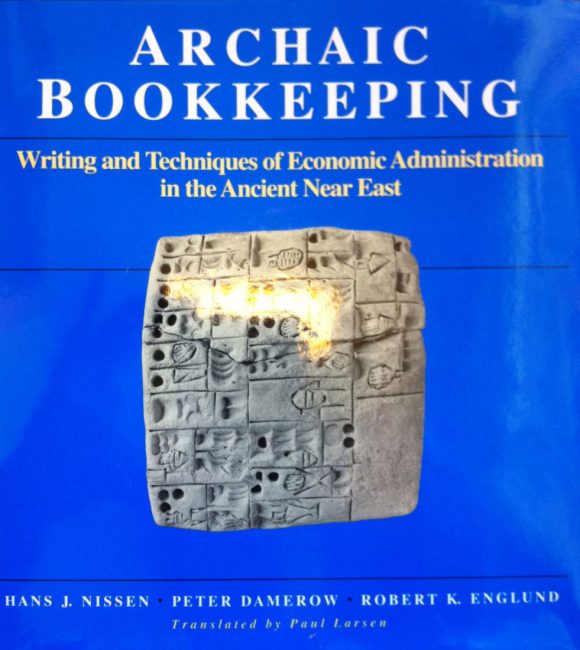 It turns out that this vagina-looking character is in a lot of Sumerian words that we wouldn’t necessarily associate with vaginas: words like “pure” and “insulting” and “vessel.” This vagina-looking graphic isn’t the only character that signifies for “vagina” either. When something is important, there is not a one-to-one correlation between that thing and a sound or scrawl. Many sound combinations signify for “vagina” because vaginas make things happen. 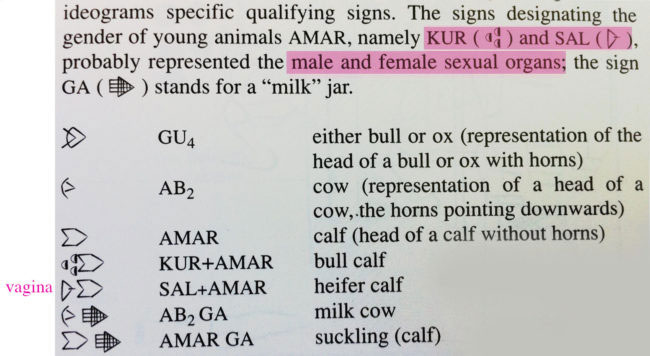 Archaic Bookkeeping by Hans J. Nissen, Peter Damerow, Robert K. Englund, and translated by Paul Larsen (©1993) was recommended to me by Philip Jones, one of the two contacts listed on the Sumerian dictionary’s website. In Archaic Bookkeeping, the authors describe the types of signs found in Sumerian. On page 89 you can find the description above of the sound combination “SAL,” which also stood for “vagina.” “SAL” plus the sign for “calf” means “heifer calf.” My son told me that he learned in history that in Ancient Greek it was a compliment for a woman to be called a “heifer.” In Ancient Egypt, “cow” and “maid” were very close (see “Roots of the Word ‘Idiot,’” https://originofalphabet.com). According to Kinsey, “Among boys raised on farms, about 17 per cent experience orgasm as the product of animal contacts which occur sometime after the onset of adolescence.”2 A male friend at UC Davis said that he knew of three male students who had claimed to have had sex with sheep, and they also claimed that a sheep’s vagina was the closest of any animal’s to a woman’s (as if they’d tried other species besides sheep). Even Jared Diamond mentions this “aberrant” behavior on page 196 of Guns, Germs, and Steel: “The answer slowly emerged: he had confessed to repeated intercourse with sheep on a recent visit to the family farm; perhaps that was how he had contracted the mysterious microbe. This episode, related to me by a physician friend involved in the case…” We all hear it from our friends. The doctor friend only heard it after he had revived the gentleman who had been beaten by his translator who also happened to be his wife. 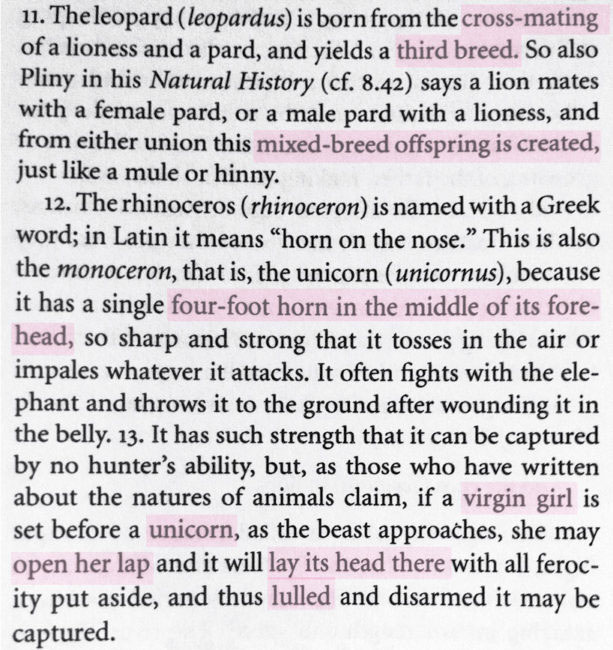 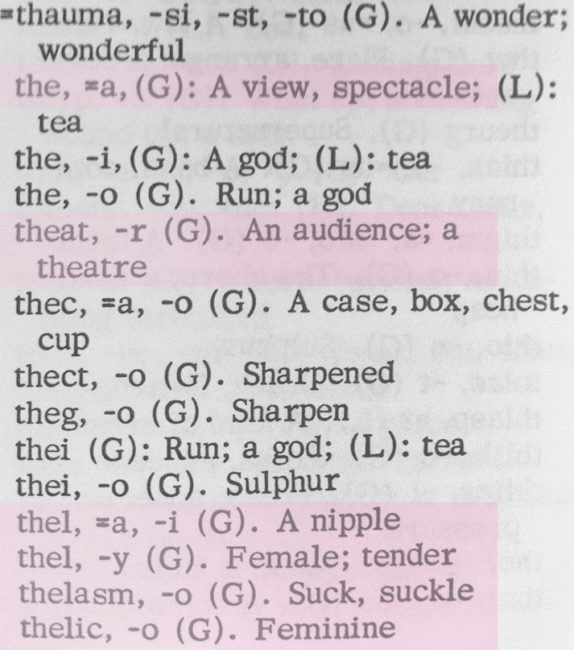 Perhaps we all should consider that this behavior is less aberrant than once suspected. We exist because the drive for sex is strong. Who’s to tell you that you can only mate with one species when you’re newly human yourself? There is a word in Hebrew, raba’, that means to mate a woman with an animal. Just because they never achieved woman-animal admixtures doesn’t mean they didn’t try repeatedly (though, if you’ve read Geek Love by Katherine Dunn, you know that prenatal experiments with toxins could theoretically create all sorts of outcomes which could appear to be chimeric individuals; early humans conceived of beings that were animal-human mixes: the Sphinx, satyrs, Hathor the cow goddess, Taweret the hippo goddess of pregnancy, Bastet the cat goddess, and many more). There wasn’t much entertainment in those days. Raba’ meant excitement. In Greek thel is “nipple” and thea is “theater” (see bottom right.) Women were theater because that was the view men wanted to see. And if you didn’t have a woman, you’d have a sheep. If you didn’t have a sheep, you’d have men in women’s clothing. Men in women’s clothing is the underpinning of comedy. That and people falling down. 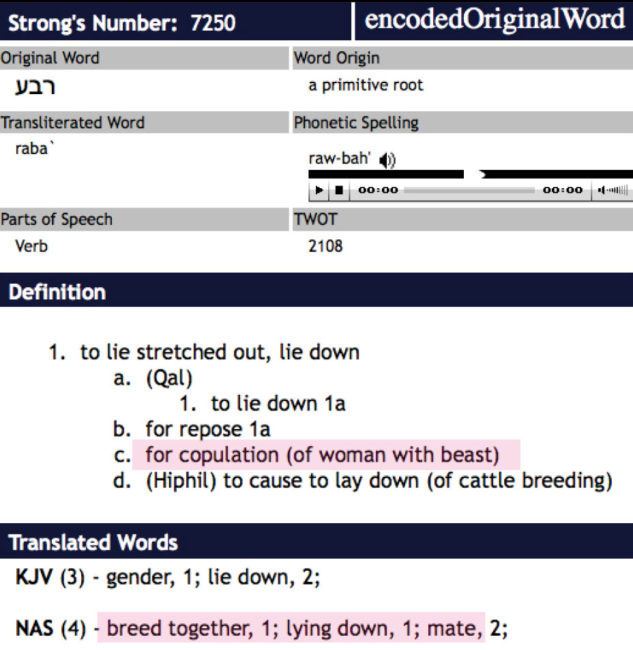 But don’t believe me. Let’s consult the Sumerians. Below is the Sumerian sign list of animals from page 89 of Archaic Bookkeeping. Think of this as a code for animals because the Sumerians (or whoever invented cuneiform because there’s a debate about that) figured out that if you breed animals, you get more. This is apparent in the Biblical story of Laban as well, where he practiced selective breeding in order to short his controlling father-in-law. 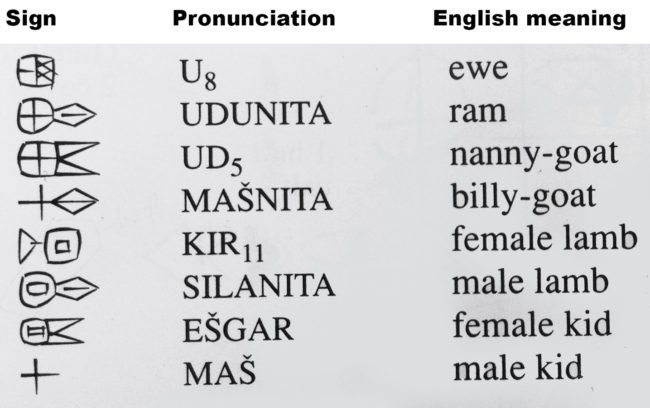 When you reorder this list into males together and females together, and then you put the complementary sex of the animal ((ram to ewe, male lamb to female lamb, etc.) it appears that Sumerians are akin to electricians. Electricians (and musicians) call the respective electrical plugs “male” and “female.” The relationship of the female to male characters below, though not always a perfect fit, still would imply that the Sumerians were depicting the rear of the animals, the place where breeding was done, which would have mattered to an early culture. 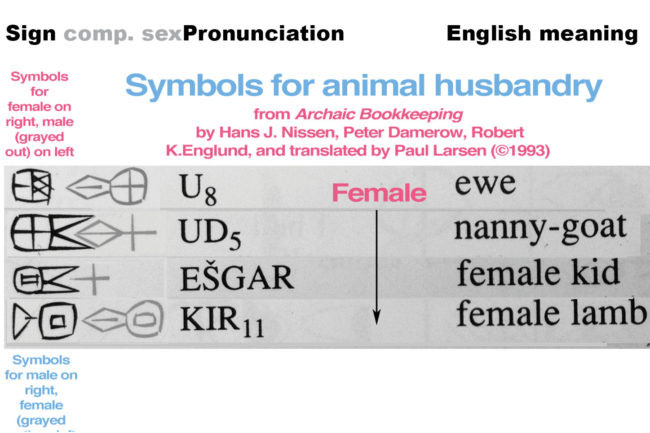 The authors of Archaic Bookkeeping did not order the animals the way I have because they are unaware of this relationship, which they make clear on page 116: “Abstract or arbitrarily shaped signs lacking any comprehensible association to the object depicted, for example, the circle and cross denoting ‘small cattle.’” (They still did an impressive job with this book.)

A plus inside a circle would be a target. “Small cattle” might be a desirable target for some 5,000 years ago. The gender symbol for woman is a plus below a circle because our vaginas are below our heads. With cattle, the circle is level with the plus because a cow’s vagina is level with its head (as with a sheep, donkey, goat, deer, gazelle, eland, etc.). 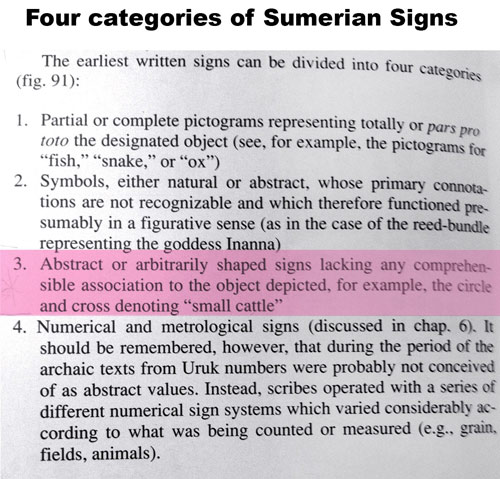 Below is an example from page 21 in Archaic Bookkeeping showing that a circle with a plus means “small cattle” (highlighted in pink). To the left is the gender sign for “woman” (which allegedly depicts the goddess Venus’ mirror). The only difference between them is orientation of the two parts of the sign: circle and plus.

The Chinese had a similar character to the Sumerian’s “small cattle” in the sinograph tian2, which means “field, arable land, cultivated.” If you read my document “‘Meow’” is just another name for ‘cat’” (https://originofalphabet.com), you will see that this target character

meant more than “field.” Some sources include “hunt.” I think it also stands for “vagina” in certain contexts, such as in the word for “prostitute”:

(Characters which include a vagina or mean “vagina.” Keep in mind that, soundwise, š = sh, and that ĝ = ng)

Click on any image below to enter the slide show. 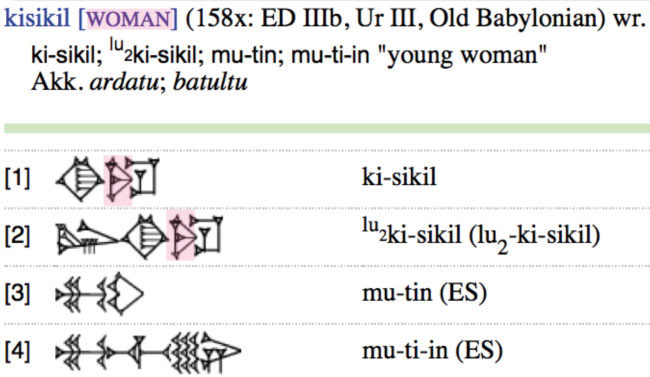 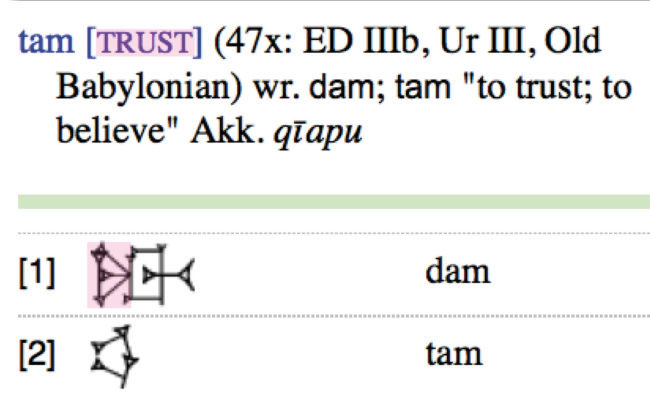 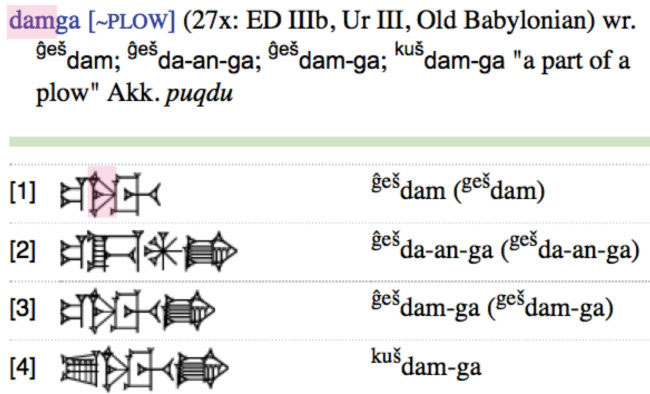 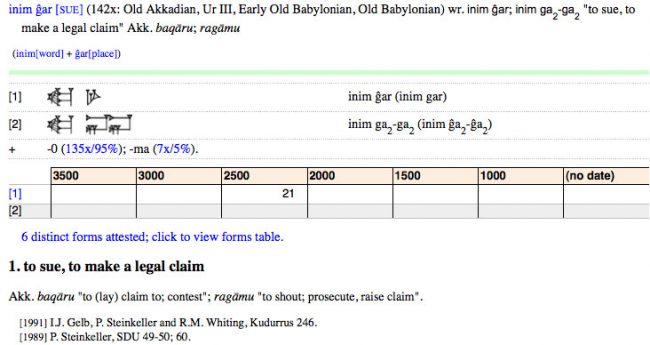 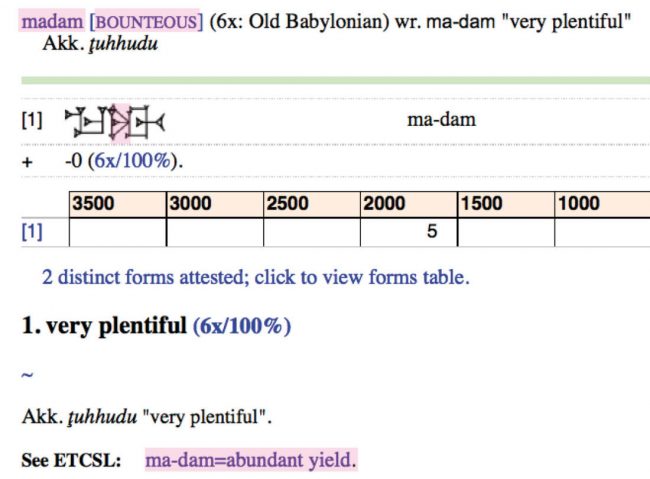 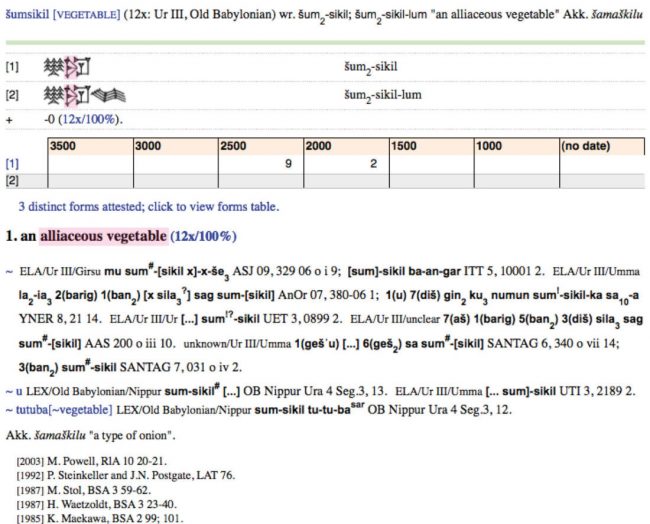 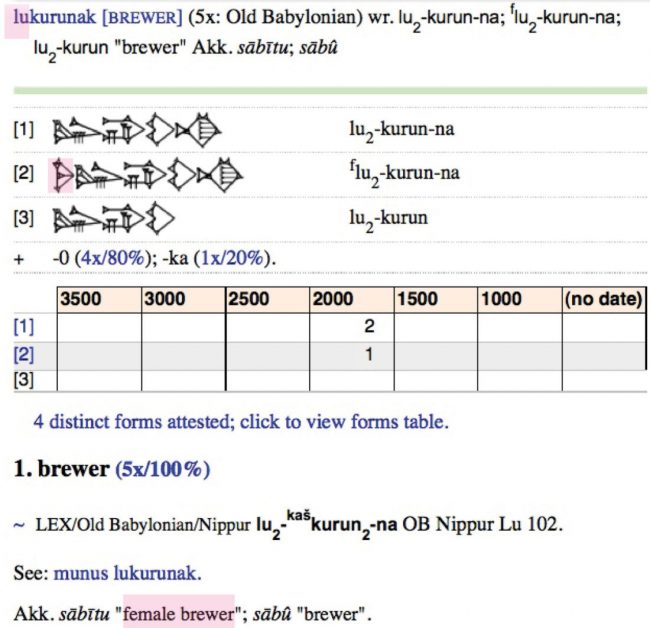 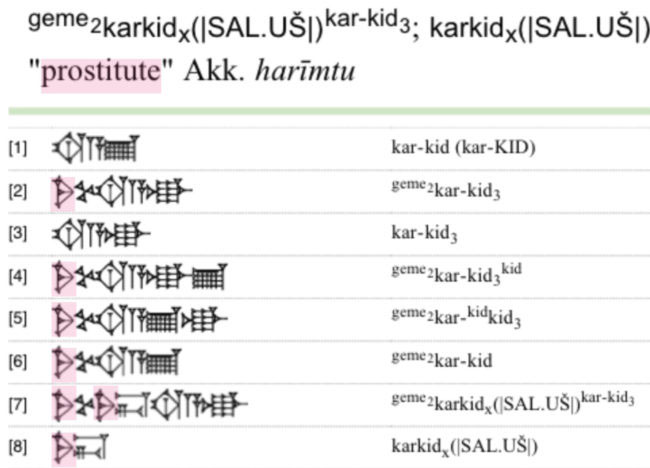 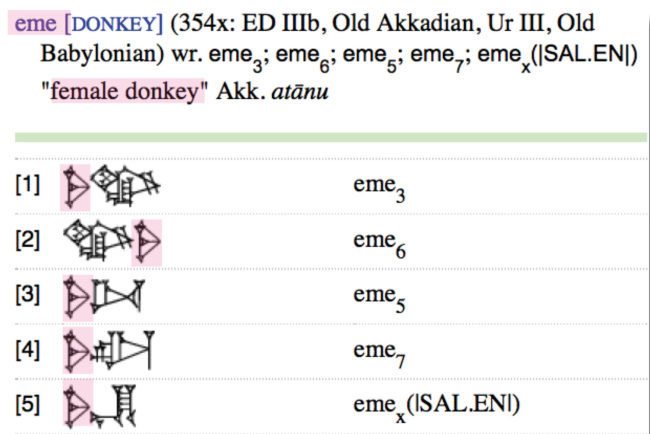 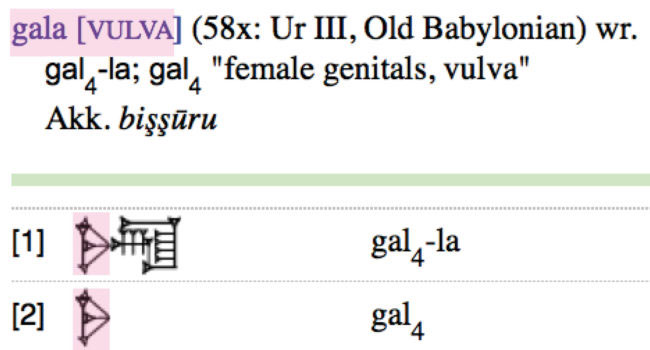 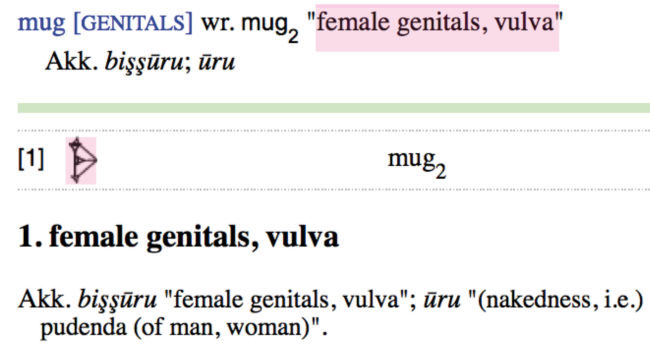 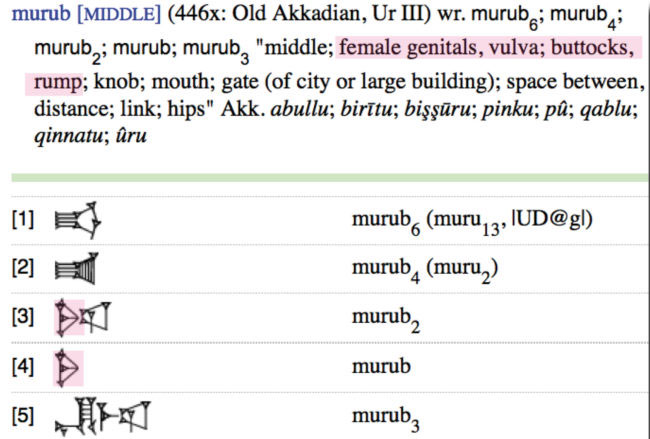 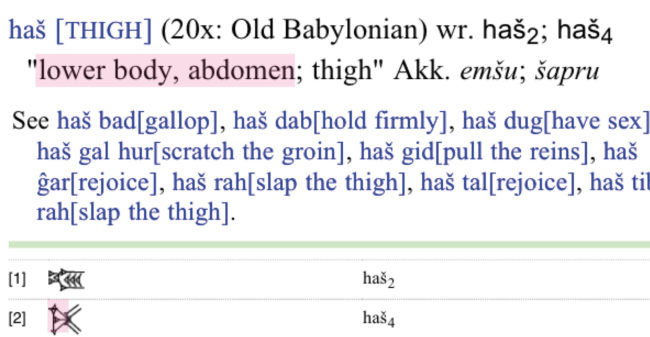 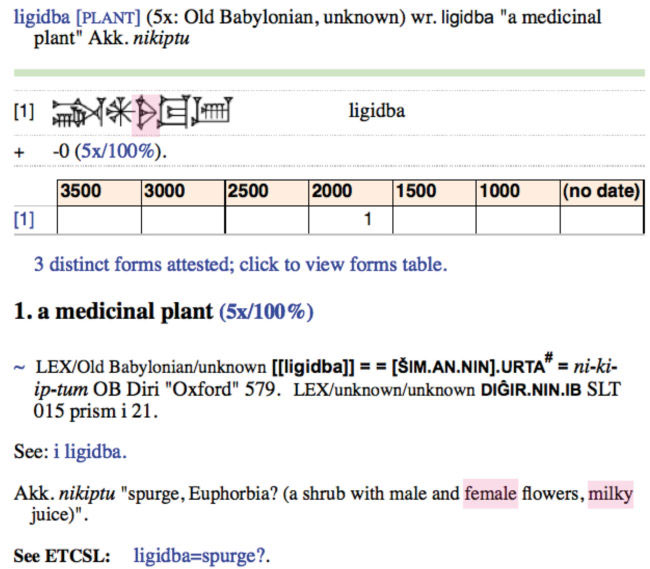 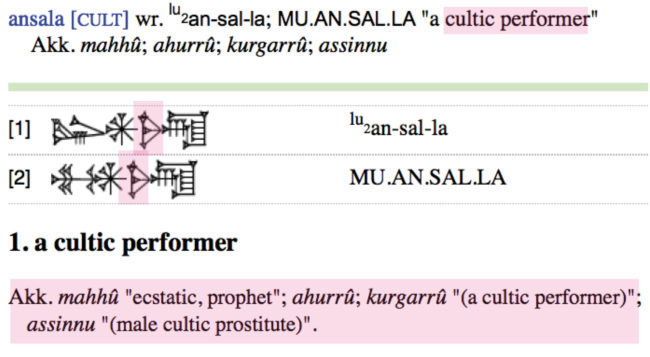 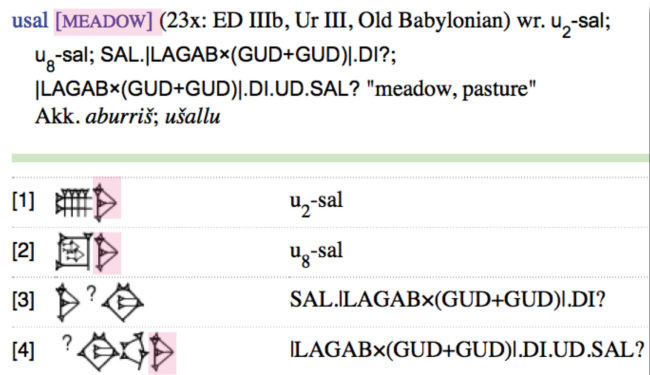 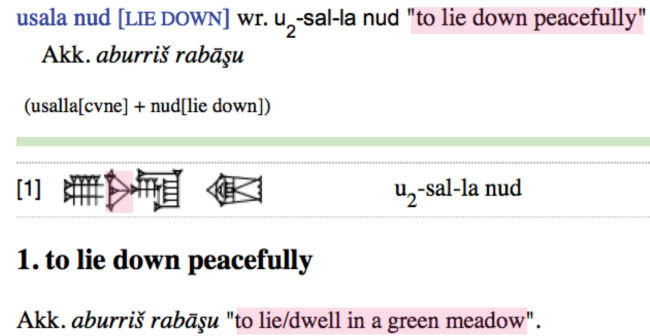 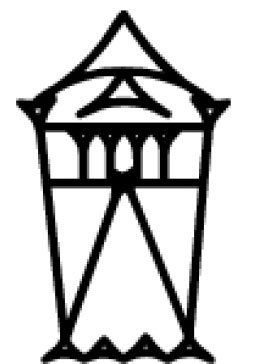 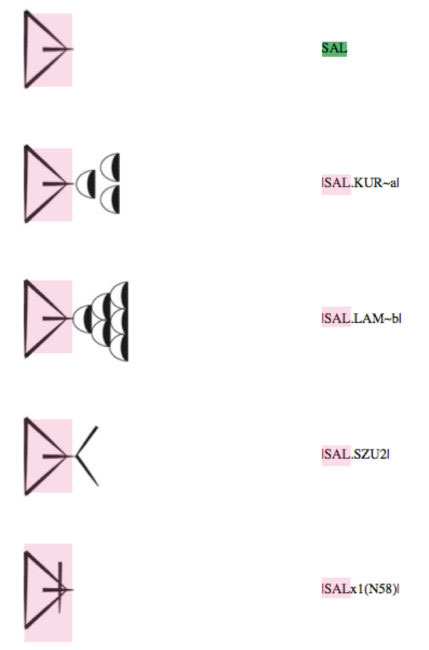 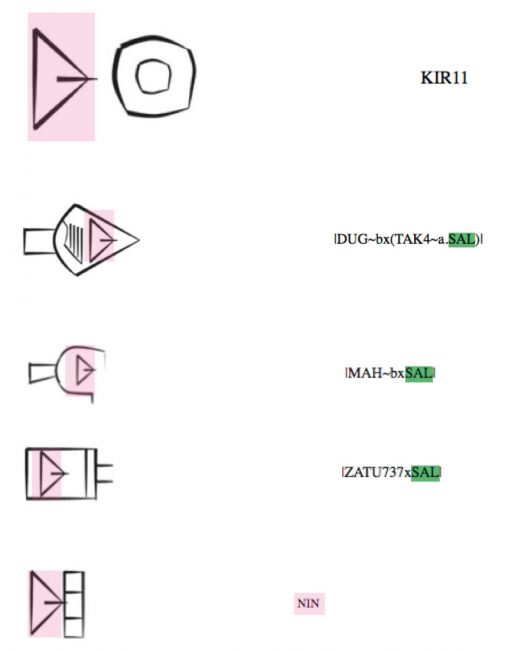 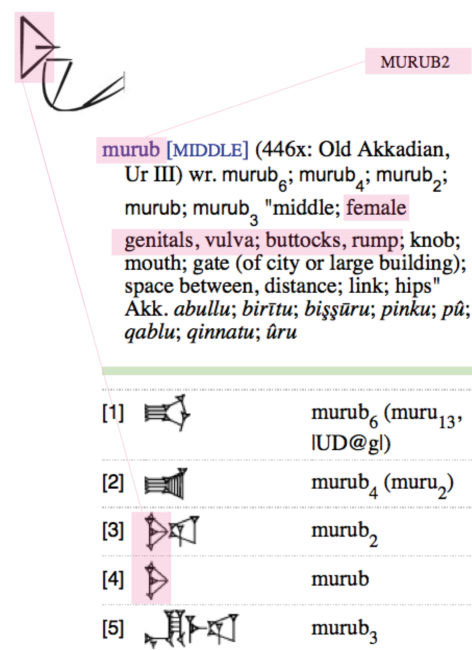