You say “gege,” I say “gugu”; you’re Chinese, I’m Akkadian, and we’re both talking about virgins

“Ge ge” (guh-guh) means “elder brother” 哥哥 ge1ge, but less commonly, it also means “princess” 格格 ge2ge2. Think of this double “G” sound as signifying for “a person of distinction”rather than be confused how it could stand for both female and male. The other similarity is that the wealth of these individuals stays within the family.

“Gege (Chinese: 格格; Pinyin: Gégé) was the Manchu style of an imperial-born princess of an
emperor. Daughters of the first ranked princes also used the same title.” – Wikipedia

The Sumerians called the home of their priestesses “gagu,” which is very close to “gege.”

The most significant case under this heading is that of the women called nadîtu, who are best known in the middle decades of the second millennium. This Akkadian name, meaning ‘left fallow’ – like an uncultivated field, a transparent metaphor – applied to the daughters of great families who, perhaps to avoid the splitting up of inheritances – for their possessions returned to their family after their death – were pledged to a god. Especially devout, as we gather from the phrases, tone and content of their letters, they lived together in a sort of convent called gagû, adjoining the temple or in its grounds, under the leadership of a ‘mother’, surrounded and assisted by both male and female staff.

Interesting to note that
嘬 = to suck
zuo1

In Mandarin Tools.com, there is only one zuo1, but 21 total zuos with different tones

Chinese zodiac: Shēngxiào 生肖
According to Wikipedia, the Chinese zodiac is not associated with the constellations. It does share similarities to the Western zodiac, however, including 12 divisions (the Chinese is years rather than months) with a majority of the names being derived from animals. 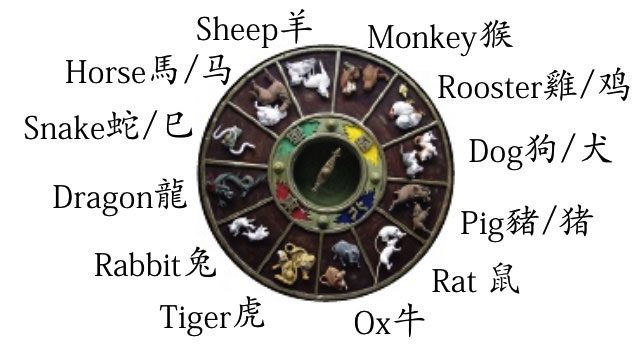 The times of day for each animal, followed by the Chinese character that is its“Earthly branch.” Ms. Mau says the animal character is on one’s birth certificate in China. “Birth times should match that of one’s spouse,” according to cultural beliefs. The I Ching uses these horoscope signs.

According to Wikipedia: “The I Ching (Wade-Giles) or “Yì Jīng” (pinyin), also known as the Classic of  Changes, Book of Changes and Zhouyi, is one of the oldest of the Chinese classic texts. The book contains a divination system comparable to Western geomancy or the West African Ifá system; in Western cultures and modern East Asia, it is still widely used for this purpose.Traditionally, the I Ching and its hexagrams were thought to pre-date the recorded history, and based on traditional Chinese accounts, its origins trace back to the 3rd to the 2nd millennium BC. Modern scholarship suggests that the earliest layer of the text may date from the end of the 2nd millennium BC, but place doubts on much of the mythological aspects in the traditional accounts. Some consider theI Ching’s extant compilation dates back to 1,000 BC. The oldest manuscript that’s been found, albeit incomplete, are texts written on bamboo slips, and dates to the Warring States Period… [475 BC to the reunification of China under the Qin Dynasty in 221 BC].”

The character on the left is the radical for “metal” or “gold,” the character on the right has the sound of “ding1” and looks like a nail. The sound “ding1” is represented by different characters which have meanings related to “nail”: for example, “to sting,” “to boil,” “to cobble, to patch,” “stare, gaze” (one’s eyes are nailed to the view), “jingling, tinkling,” and “alone.” A solitary nail.

刅 = to create, to make to invent; to begin
chuang1

From Wikipedia: “Guanyin is the bodhisattva [an enlightened (bodhi) existence (sattva) or an enlightenment-being or, given the variant Sanskrit spelling satva rather than sattva, “heroic-minded one (satva) for enlightenment (bodhi)”] associated with compassion as venerated by East Asian Buddhists, usually as a female. The name Guanyin is short for Guanshiyin which means “Observing the Sounds (orCries) of the World”.  She is also sometimes referred to as Guanyin Pusa (simplified Chinese: 观音菩萨; traditionalChinese: 觀音菩薩; pinyin: Guānyīn Púsà; Wade–Giles: Kuan-yin Pu-sah; literally “Bodhisattva Guanyin”).

“It is generally accepted (in the Chinese community) that Guanyin originated as the Sanskrit Avalokiteśvara, which is her male form. Commonly known in English as the Mercy Goddess or Goddess of Mercy, Guanyin is also revered by Chinese Taoists (sometimes called Daoists) as an Immortal.However, in Taoist mythology, Guanyin has other origination stories which are not directly related to Avalokiteśvara.”

環/环 = bracelet; ring (not for finger); to surround; to loop; loop
huan2

“My grandmother was not the first wife.” Paraphrased: When my grandfather stood at the corner of the street(?), he got married to my grandmother, they had one daughter. They lived together; he had two wives in the same big house. When they both had girls everyone was happy. But then the second wife [my grandmother] had a boy. Then three boys. My dad was the youngest. Grandfather gave second wife the house. First wife is now gone. Now they did not admit there was a first wife. Grandfather supportedfirst wife (allegedly). My mom was the CEO of a dept. store. They did a background check of my mom.
Many things my dad didn’t know about his family came up. They changed his name. He would not have been allowed to go to school (because of name?). My grandmother became a widow at 31. My dad was18 months old. She had a second grade education and a city to run.

Compare these characters below, note that the only part that changes is the bottom:

One’s widow, one’s essence, one’s mark and one’s ox: all the things that one who is male leaves behind.

A widow is a woman who is frozen.

天子 = son of heaven: the emperor; since Mao couldn’t call himself a “child of heaven,” he called the Chinese people 中 zhong1 “the center.”

日本 = Japanese
ri2 ben3
Only the Japanese call their country “ri2 ben3 guo3”. The Chinese say ri2ben3 without guo2 because “not a country” (read: insult).

you can also say

In Chinese, American English and British English is the same word. If you tell people that you are from the U.S. or England, they assume you speak English 英文. However, we don’t say 美文.英语 and 英文 both means “English.”

Do not use the hand gesture that means “come here” (hand palm up, first finger pulling in toward palm
repeatedly.) This is only for dogs.

“San Fan Shi” instead of “Jiu Jin Shan” and “Aobama” vs. “Oubama” in Mandarin:
Los Angeles, California.: “Aobama” is the official Chinese translation for the last name of the current
US President “Obama”. However, the White House suggested that the name should be translated as“Oubama”, because it sounds closer to “Obama” in Mandarin.

“Traditionally, when translating foreign proper names phonetically, official Chinese translators follow a table in which certain Chinese characters are used instead of others. The purpose is to allow Chinese people to immediately recognize that it is a non-Chinese speaking foreigner.” Says Samuel Chong, aChinese translator at Abacus Chinese Translation Services. “Therefore, sometimes, the chosen character does not necessarily reflect the closest sound.”

Traditionally, when translating foreign names, there has been regional differences within China. For example, the people in Canton (Guangdong) province used to call San Francisco “San Fan Shi”, instead of “Jiu Jin Shan”, or “Old Gold Mountain”, in which most of the rest of the China uses. “That is because most people in Canton (Guangdong) province speak Cantonese, instead of Mandarin. It sounds much nicer to say “San Fan Shi” in Cantonese compared to “Jiu Jin Shan”.” Chong says.

你从哪儿里?
Ni3 cong2 na er lai2?
Where are you from? (literally “You from where inside?”)

會/会  = be able to; be likely to; to assemble; to meet; to gather; group; association
hui4

Chinese characters and definitions from:
http://ctext.org/dictionary