If we want to help eliminate bias, we need to change our language, which includes not using “black” and “dark” as “bad.”

Rosie O’Donnell Encourages Us to Think About Bias in Language

I am a language researcher. When “black/dark” 黑 is equally bad in China (I’ve lived in China for two years and studied Chinese for ten), one begins to wonder if this is linguistic universal. No more “dark side,” which is a cliché. No more “throw some shade.” Why did the pleasant “made in the shade” turn into the violent “throw shade? Is shade, which protects us, now suspect because of its color?

Thank you if you can help me by signing and sharing my petition asking WaPo to stop using “Democracy Dies in Darkness” because we need inclusive language:

Right now we are dying whiteness. WaPo: Change your tagline!

Thank you if you can help me by signing and sharing my petition asking the police to stop using dark silhouettes of humans against white backgrounds for target practice: 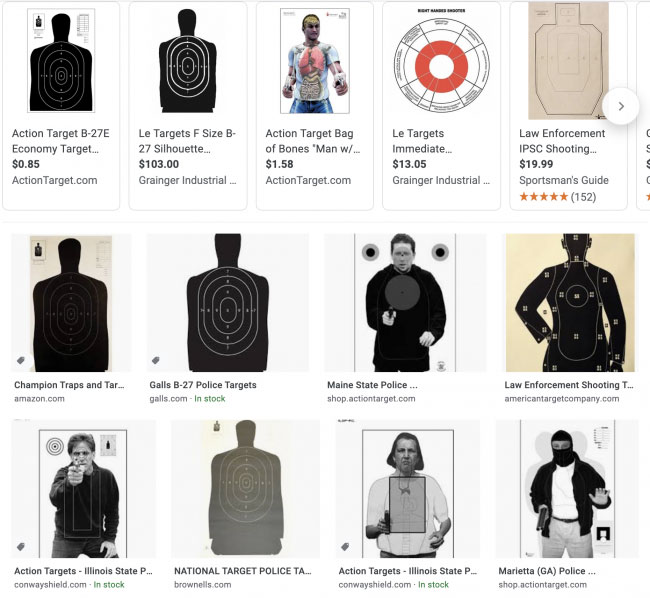 Emmy Award nominee and Stevie on Marlon, Diallo Riddle encourages us to use inclusive language. No more “little white lie,” because then what color is a regular lie?

No more “find the dirt” on someone. This is all guano (white shit, because if you are trying to convey the concept of “shit” then white shit is a perfectly fine substitute because we’re in a lot of it).

Unconscious bias is rampant, and here’s a place where we could change perception just by changing language. We did it with sexism! Secretaries are now “admins,” chairmen are now “chairs,” “stewardesses” are now “flight attendants.”

Recognizing how often we employ bias is key to resetting our brains’ associations. We should exchange the word “fair” for “equitable” because implying that equality is only under the purview of those with fair complexions also perpetuates bias.

Dylan Ennis, a professional Canadian-Jamaican basketball player, hopes that we can use language in a way that doesn’t transfer negative connotations to people.

The visual spectrum does not confer morality, and we should stop making it do so. If we want to stem the number of people with dark skin dying at the hands of authorities and others, we need to change our speech. The consistent survival strategy of humans is that we evolve. Here is a good time and place to do it. 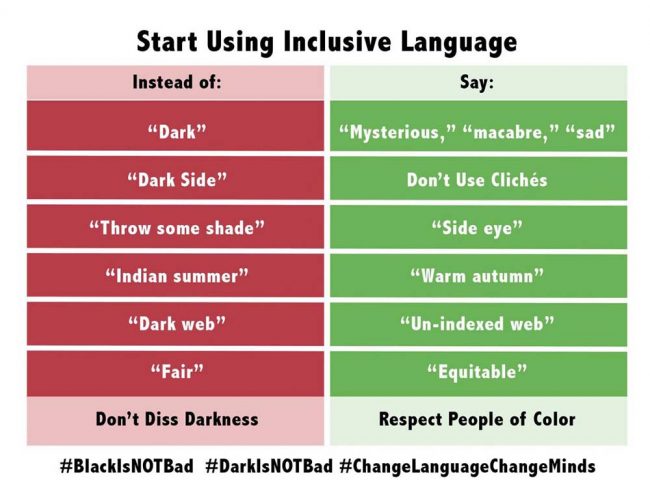 Please think about the affect that words have upon the human brain, and the fact that this bias is so thorough as to take the pleasant  “made in the shade” into the violent “throw some shade.” We really have to ask, why is shade bad when it protects us?  Is the color black so offensive these days that even something that protects us is now suspect simply because of its color? This reminds me of the fact that semen is elevated (seminal, seminar, seminary) and women’s fluid is devalued: “You’re milking that.” “You suck!” I ask, why is sucking bad if we all sucked? Because it’s in the province of females. In both of these cases, something that we know is good—shade and milk—is besmirched because of the color and the source. When we find congruences like this, we know it is not accidental. Until we change language, nothing will change. Until we change language, we will be fighting the Civil War over and over again. We need to rewire brains. 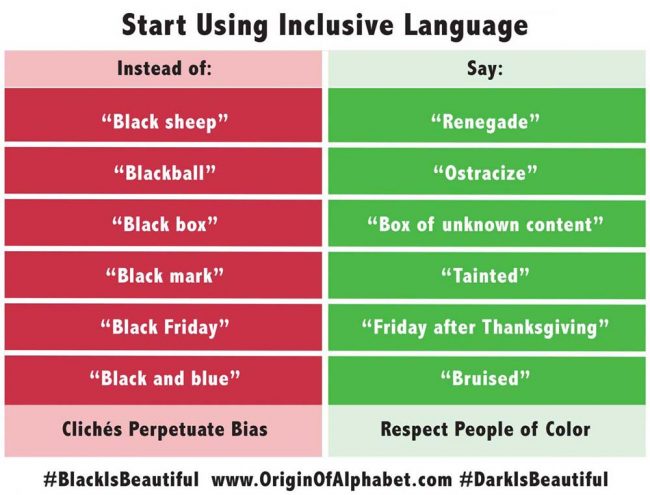 Professional wrestler RJ City says, “There are always other words…let’s find new, better words.” He proposes instead of “blackmail,” we say, “I got schmecklicked!”

Frangela is “your back up and your black up!”