Prototype for a Substructure – Searchable Database of Hanzi

Let’s say you wanted to find all incidents of 卯 in every Chinese character, which right now you cannot. You would take a cursor and circle the character you want to see displayed, even if it’s part of another character.

Circle the character you want to see displayed, even if it’s part of another character.

And this selection would bring up a variety of sites depiction the relevant character, including both of these:

The first links would include precursors of 卯 from ChineseEtymology.org 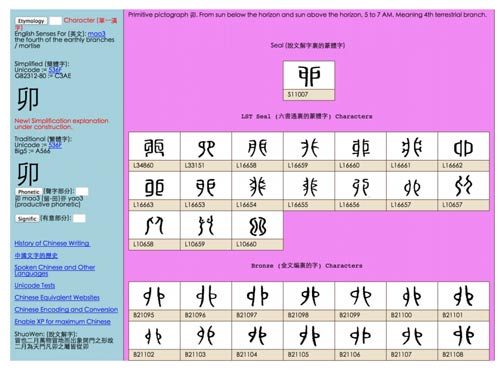 The fact that there are a lot of identical precursors to this character means that this is not only an important concept to early humans, but it is a unified concept. 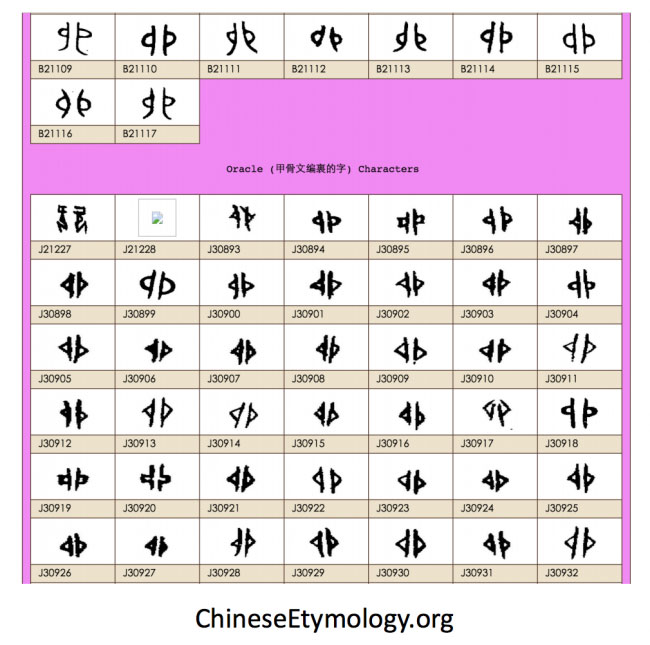 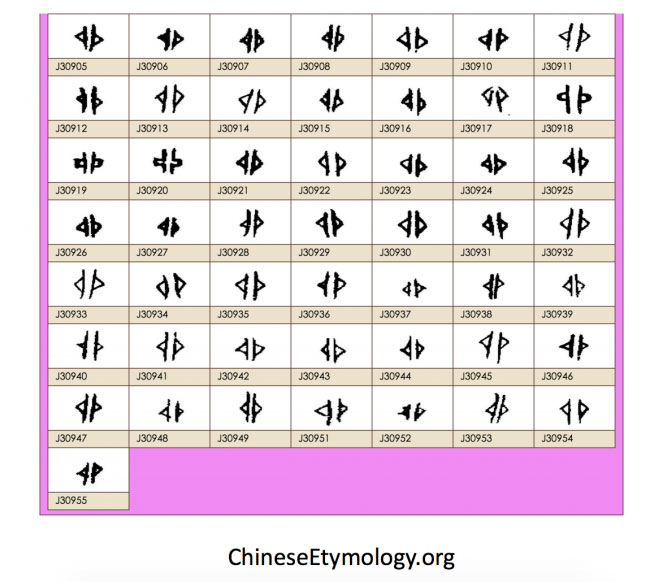 The next links would be from Chinese Text Project 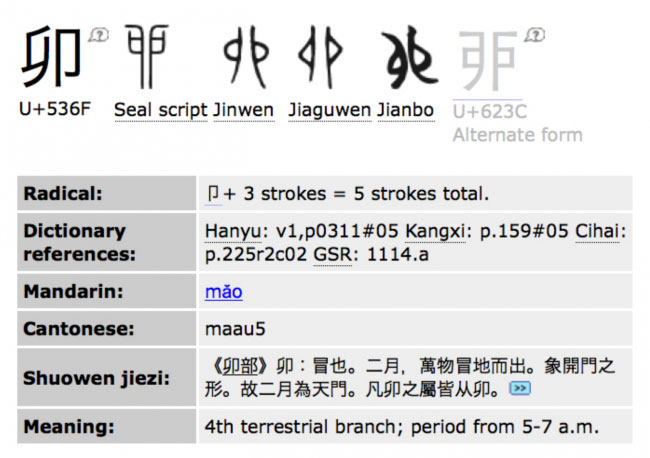 Including characters traditionally not found when searching for the phonetic component. 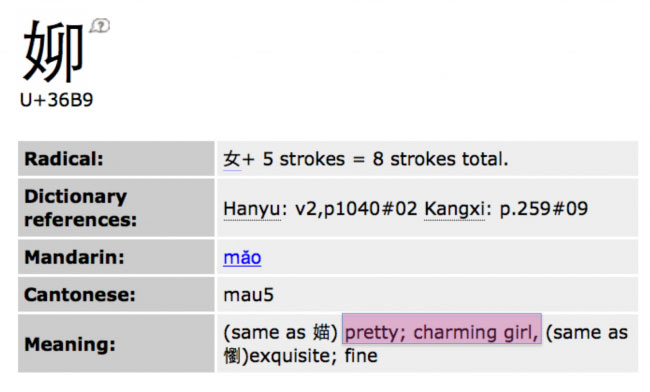 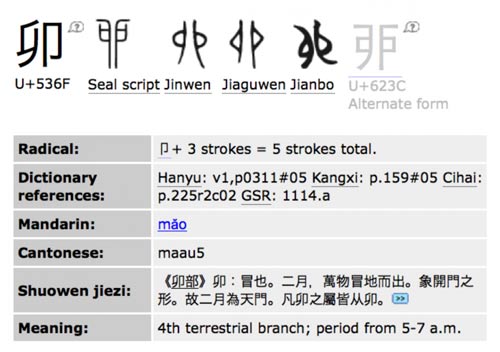 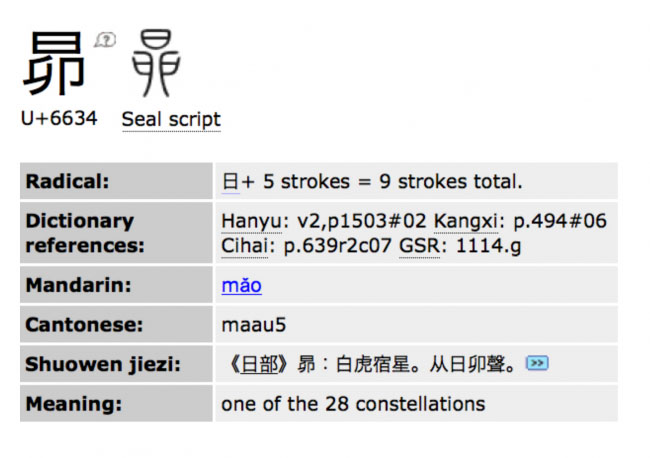 Other relevant info not included in Chinese Etymology and Chinese Text Project sites would be gleaned from sites such as Cantonese.sheik.

As well as the entire listing of every known character that incorporates that structure along with its meaning for easier analysis.

So that all meanings of a particular structure can be appreciated. 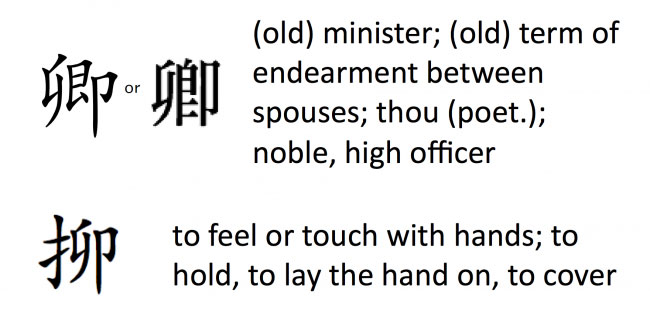 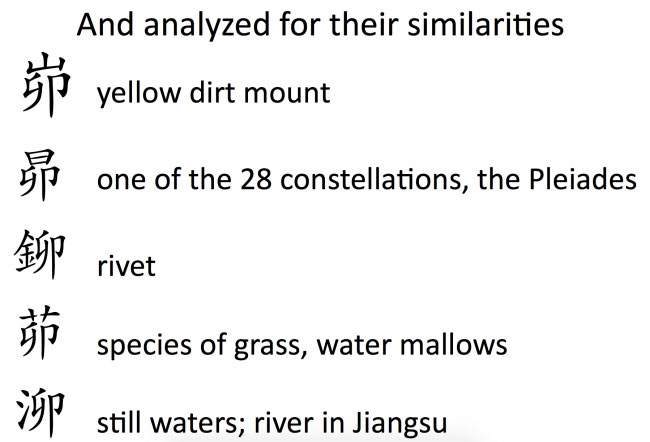 Including all the characters that have this 卯 structure with two dots.

The listings would follow the same order, first ChineseEtymology.org. 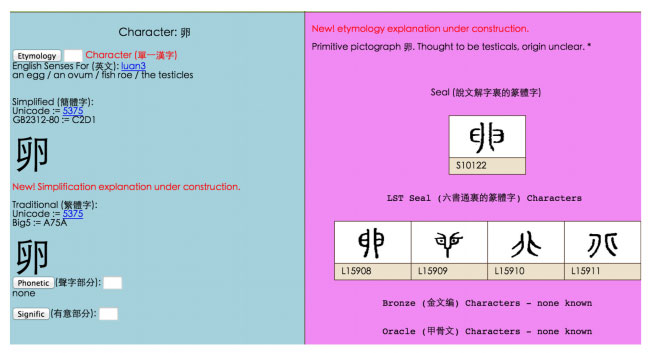 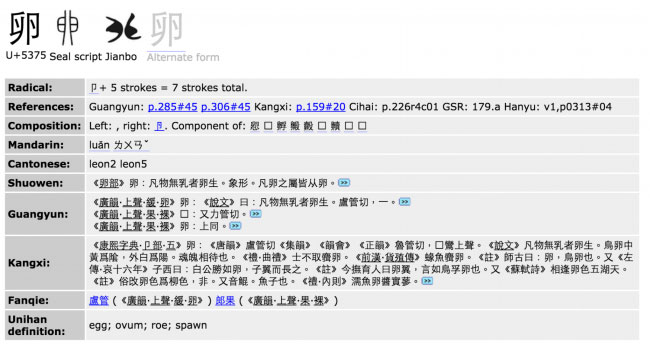 Plus every incidence of this character, gleaned from standard dictionaries. 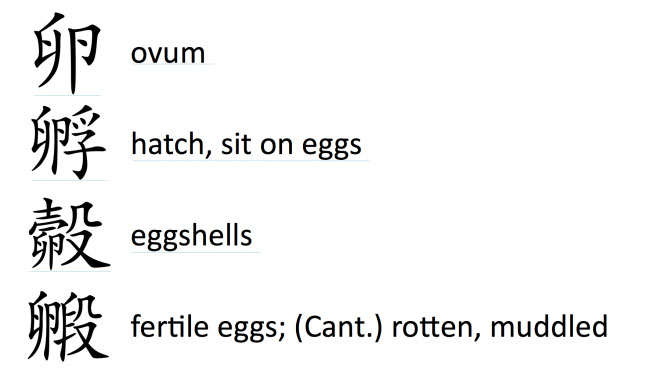 One could also circle only a piece of a character… 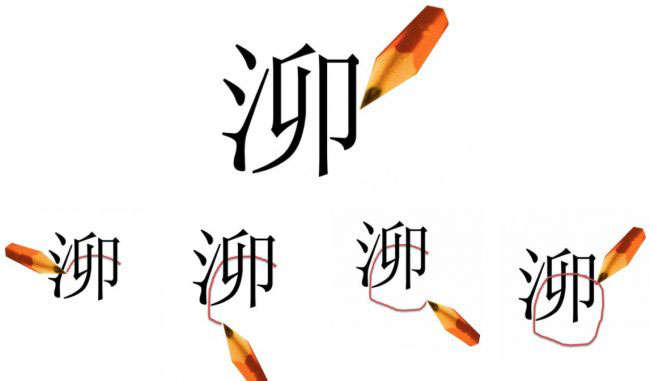 This will bring up all the previous characters already seen… As well as characters that only have the bottom half of the 卯 character, such as…

Which have a structural relationship with 卯 as well as a conceptual one. 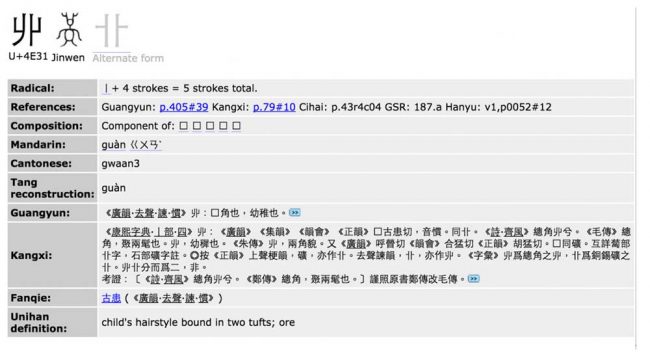 Plus the database would display characters that include the 丱 substructure.

That is the tip of the iceberg.

• There are many more such structural lineages to be analyzed, the tool just needs to be built.

• I am looking for partners in order to create something that does not yet exist. • Let me know what you help/advice/aid you can offer.

• Using this and like tools, we could all be learning languages faster.

So that was the tool. This is a possible analysis:

The hair style of a young girl communicates her eligibility for mating in many cultures. Just like 妹妹 means “younger sister” and 未 means “not yet,” the character 丱 implies that this statistical girl is not yet ready for procreation—but she will be soon.

The word “ore” is significant as it represents unrefined material, like a pre-fertile, virgin girl. There is value inherent in both ore and a female who can produce a genetic lineage for a male.

Metaphor and euphemism both explain and beautify reality

• This statistical girl is the metaphorical “ore” that will soon be “mined.”

• Metaphor and euphemism are the tools that humans use to conceptualize and understand the world.

• We use the known to explain the unknown. We also use a pretty picture to describe something less pleasant (月 representing 肉 comes to mind…)

• Males cannot create offspring on their own.

• Females were the first automation.

A dynasty is a “gynasty”

• A male harem can’t make as many offspring as a female harem.

• One man can inseminate many females, not vice versa.

• Kings had harems in order to create a work force and warriors.

Even if you don’t agree with all the analysis, it’s clear that a better Hanzi search tool is needed in order to be able to see the relationship of structure to meaning; to see if there is indeed a relationship between structure and meaning. We can’t claim there isn’t if we’ve never analyzed the relationship.

• Humans, being animals, have pattern which they have injected into written language.

• Each culture has its own code. That code is a subtlety of which even the culture is unaware.

• If we could magnify that subtlety, we could teach language faster using the POV of the culture and its logic that is impregnated within the visual aspect of the script.

If we had a substructure-researchable database to make comparisons, then understanding, retaining, and teaching Chinese would be greatly facilitated.