Harmony “hamun” is fish plus salt in Sumerian

Sumerian cuneiform is considered the oldest written language. Sumerian is the spoken language, cuneiform is the script; just like English is our language, but the alphabet is our script. Other languages use our script as well. Akkadian, another very old language, also used cuneiform; however, Sumerian and Akkadian are not considered to be related. Sumerian is called a “language isolate.” According to Wikipedia, a language isolate is “one that has not been demonstrated to descend from an ancestor common with any other language.” This means that any cognates—words that sound and mean the same thing between one language and another—are pure coincidence. It would seem that there is an incredible amount of coincidence between our language and Sumerian. And these coincidences are all in the vein of fertility, women, and music. It’s as if a groove of congruence runs through all ancient languages. Shakespeare wrote, “If music be the food of love, play on.” For the Sumerians, music and food seemed to have come from the same person: a woman. “Hamun,” the Sumerian word for “harmony” also means “female mourner” (see page 3). 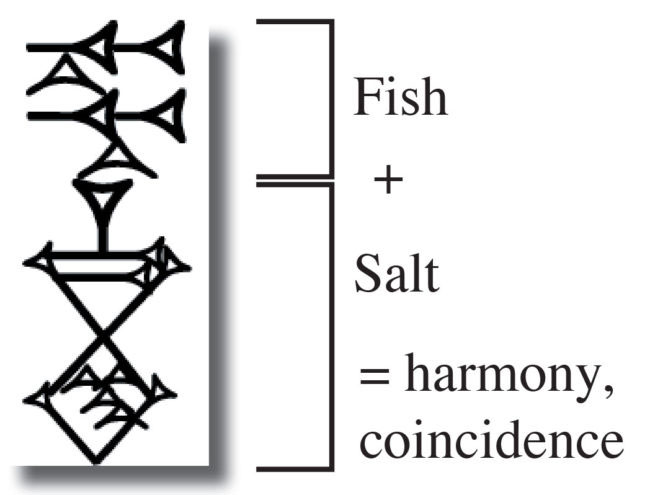 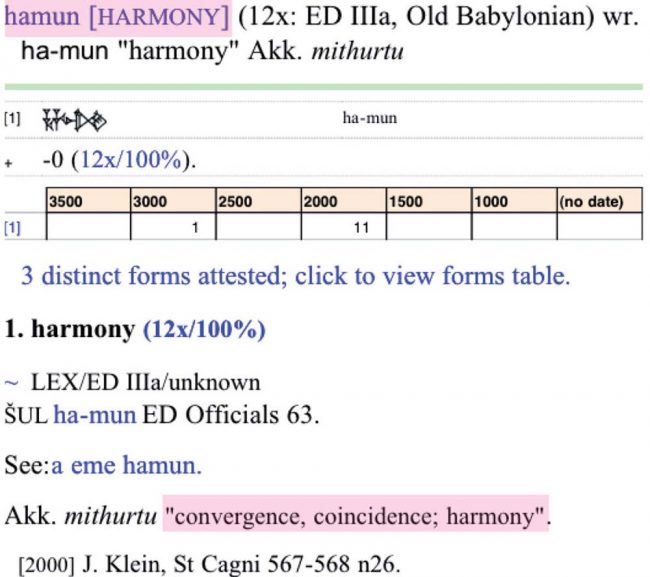 Hamun, besides meaning “harmony, also means “bird” (top page 3) and in Akkadian, “female mourner, bird, insect.” A female mourner probably moaned and sang, as women still do in mourning. Birds and insects make noise. All of this could liberally be classified under “music,” which is what the Sumerians appear to have done. The Beatles wouldn’t come for 5,000 years, so you can’t blame them too much. 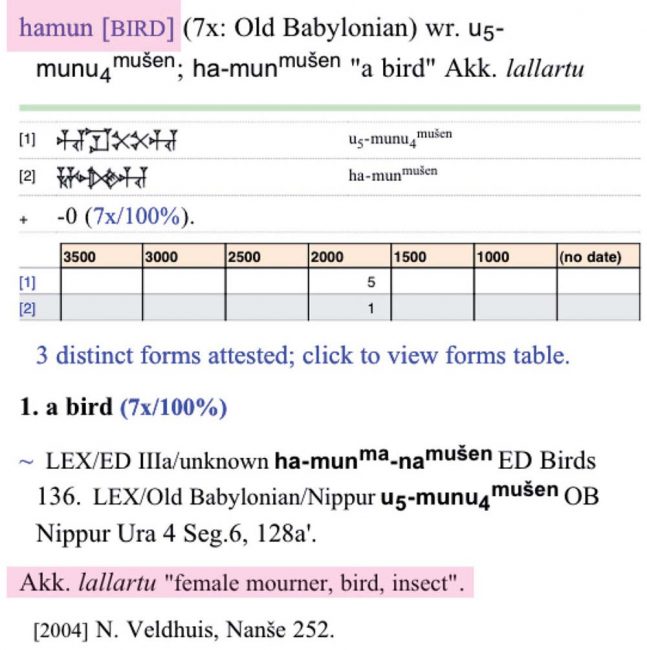 Below dalhamun would seem to mean “disharmony” in the form of a storm.

The root of “hamun” is “salt.” In Sumerian “salt” becomes “malt” with the addition of one letter, and in English, the one letter changes from “s” to “m.” Another amazing coincidence1 The word “salary” comes from “salt” (OED: “originally money allowed to Roman soldiers for the purchase of salt, hence, their pay”). “Sal” in early Sumerian means “vagina,” as can be seen on page 35, “Vaginas depicted in Sumerian.” To sally forth is to go to battle, and nubile women were often the frontline of war: booty used to lure men into not fighting. 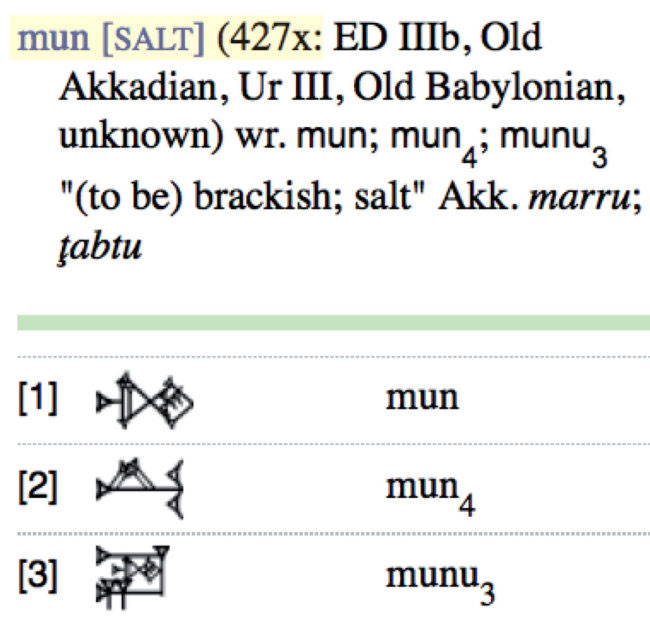 In Sumerian, “mun” is “salt,” “munu” is “malt,” and “munus” is “woman,” a person who can make more people, just like malt is a grain that has sprouted and started a new plant. Notice the Sumerian character for “malt” at the bottom of this page is the same character repeated: a clone. On the next page, “munu” in Akkadian means “larva.” These are all words for new growth. Interesting that our word “moon” signifies for a celestial object that is new every month and is associated with women and menses (women’s menstrual cycles are the same length on average as the moon’s cycle).

The association of women with the moon and the night is a constant in all cultures. Perhaps because night was when the men typically had sex with them. In Chinese women’s in-laws are associated with dusk (the character for “woman” and the character for “dusk” are almost identical: see “‘Meow’ is another name for ‘Cat’”). 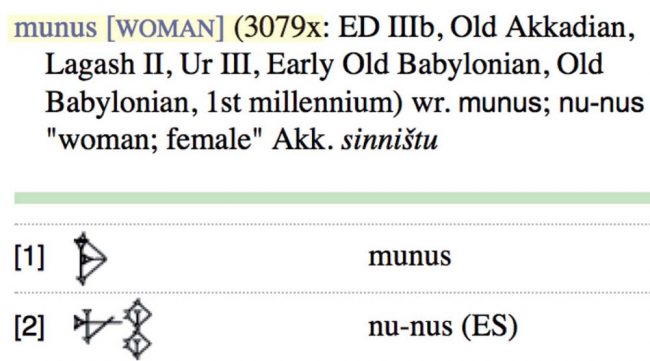 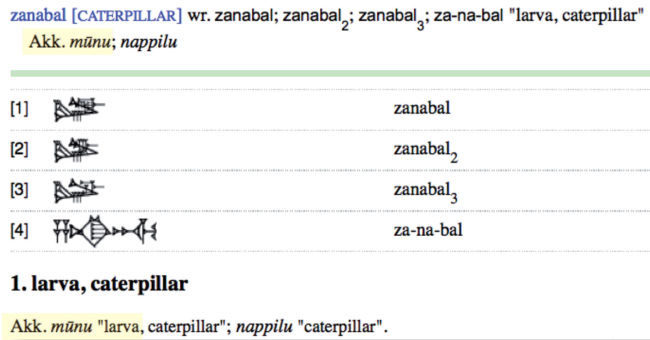 Women, noise, birds, and music have a strong association in Sumerian. A wet nurse, a woman known to sing lullabies, is (in Akkadian) a museniqtu—“musician”? “Bird” in Sumerian is “musen.” Birds and musicians share music, an important human experience. 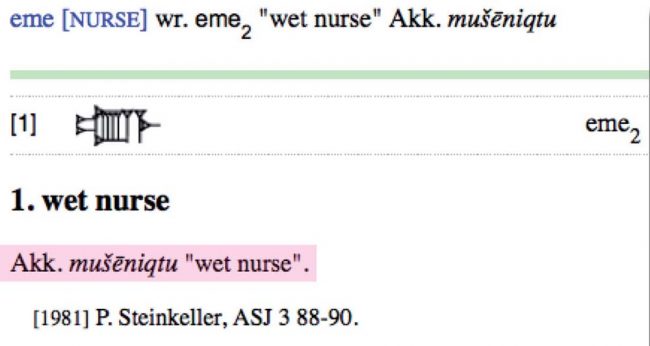 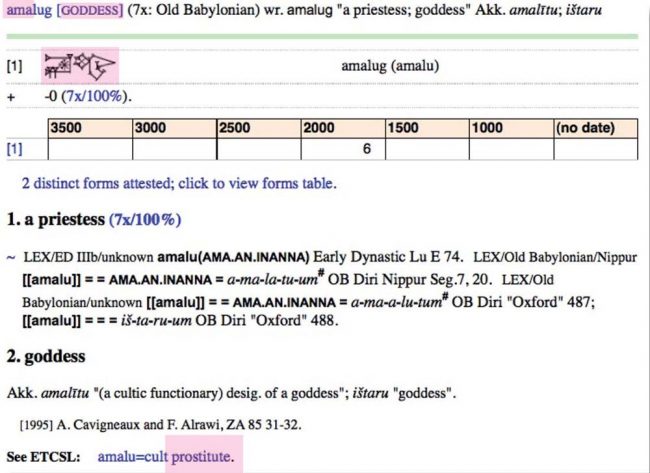 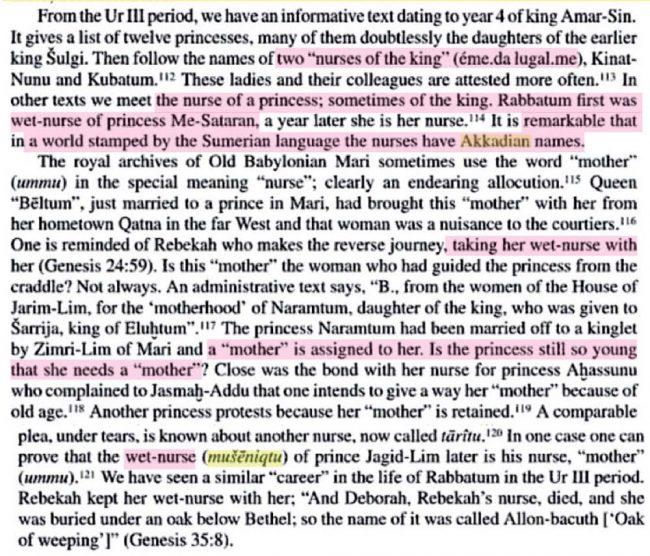 “Is the princess still so young that she needs a “mother”? the authors ask in Birth in Babylonia and the Bible (page 189 above). No, but she needs a source of moisture and sustenance and that is in the form of a wet nurse. Slave women were essentially dairy cows.

Harmony was having fish and salt at the same time, or perhaps milk and a woman. 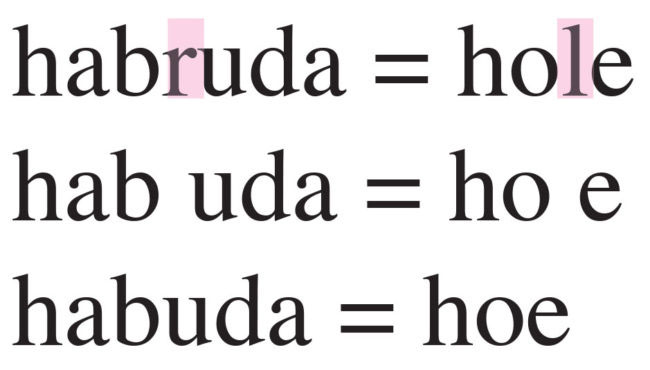 The relationship of “hoe” to “hole” was not lost on the Sumerians, as you can see the vagina depiction in one of the depictions of “hole.” 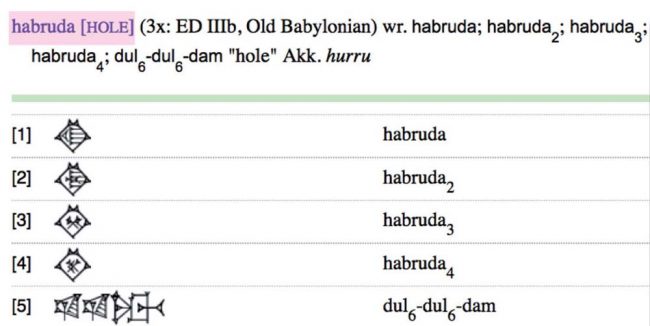 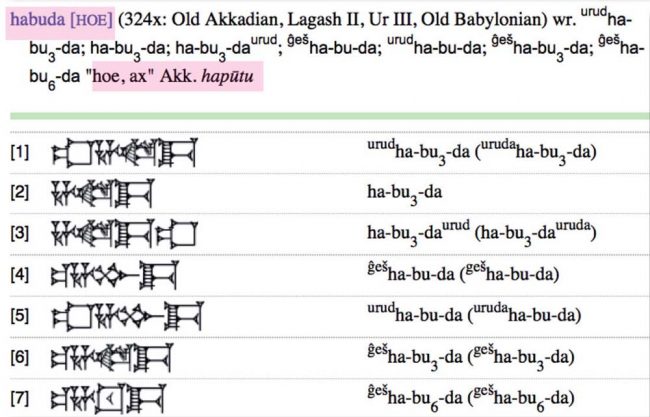