Many insults imply that the interlocutor’s mother or even grandmother was promiscuous. The turtle is emblematic of the penis and also of promiscuous intercourse. Eggs are the progeny of turtles and other lower animals, so the word dàn (蛋) is a metonym for offspring.

The 中文大辭典 Zhōng wén dà cí diǎn (Encyclopedic Dictionary of the Chinese Language)) (something a little like the OED), discusses 王八 (wáng bā) in vol. 6 p. 281.“Wáng bā” is the term that is usually written casually for the slur that means something like “son of a bitch.”

A “wángbādàn 忘/王八蛋” is the offspring of a woman lacking virtue. Another meaning of 王八 is 鼈 biē, fresh-water turtle.[4] Turtle heads reemerging from hiding in the turtle’s shell look like the glans emerging from the foreskin, and turtles lay eggs. So a“wang ba” is a woman who has lost her virtue, and a “wang ba dan” is the progeny of such a woman, a turtle product, but, figuratively, also a penis product.

“Wáng bā 王八” originally got switched over from another “忘八 wàng bā”(one that referred to any very unvirtuous individual) because of a nasty piece of work with the family name Wáng 王 who picked up the nickname 賊王八 zéi Wáng bā (“the thieving Wang Eight”) but for being a dastard, not for being a bastard. The dictionary doesn’t say, but he may have been the eighth Wang among his siblings. Anyway, he became “crookWang eight” and the term stuck and spread just as “Maverick” did in English. There isa pun here because of the earlier expression 忘八 wáng bā used to describe (1) any per-son who forgets/disregards the eight virtues, (2) an un-virtuous woman, i.e., one who sleeps around. The first meaning applied to the dastardly Wang, but the family name got “stuck”to the second, sexual, term. (end quote)

And more on Breasts (with enlarged type because somehow that seems appropriate):Breasts(quote)

* bō (波, literally “wave” or “undulating”, but sometimes suggested to be derived from “ball” which has a similar pronunciation) = boobs.[3] The typical instance is bōbà (Chinese: 波霸), which refers to a woman with very large breasts.

The rest of class:

More answers for “How are you today?”

Consider that “shen2” is 10 soldiers and “me”is small, so one is asking “Which small grouping of the 10 soldiers?”

什么
Shen2 me? tone up = what?
shen2 me? tone down = whatever… (kids say to their grandparents in disgust)(sounds like shuh-muh)

Ms Lin: “However, because of cultural expression are different as you know, I think a better way of saying is:

However, says Ms. Lin (skip ahead if the complexity is too much, this is not from class; simplified in parentheses):

本 “ben” is like articles in English words, for example, you put “a” before a consonant sound and “an” before a vowel sound. In Chinese, it’s a lot more complicated than that. here are some examples. There are many more. You will learn them as you go along.

一本书 a book, you use article 本 for book

一張椅子(一张椅子) a chair, you use article 张

一個人 a person, you use article 個

Note: you don’t mix these articles with the nouns that are following the articles. For example, you don’t say 一朵人 because 朵 is appropriate for a flower, not a person. You also don’t say 一個船 because you use 條 for boat, etc.However, if you want to use words like “several, many,” then there are separate words for them, too.for example,一群人, a group of people, so article 群 refers to a group, as an article.

寫/写 = write; draw, sketch; compose (this character looks like a horse; using a mnemonic like the word“ride” to help remember“write” can help one retain this character).
xiě3

Abbott and Costello’s “Whose on First”concept in Chinese is on YouTube. Will look up soon.

“They called her Yang2 er4

楊二.”(Don’t remember what this is)

People change their name to 丁 ding1 because 2 strokes is at the top of the conceptual “alphabet” for Chinese. Their dictionary is organized in stroke order, with the least number of strokes at the top.

抛书包 = throw out the book back – idiom
pao1 shu bao1
(you’re acting too smart, like a show off)

包 = to cover; to wrap; to hold; to include; to take charge of; package; wrapper; container; bag; to hold or embrace; bundle; packet; to contract (to or for)

你有兄弟或姐妹吗?
ni3 you3 xiong1di huo4 jie3 mei4 ma? = you have brothers or sisters?

和 = and; together with; with; peace; harmony; union
he2

Ms. Mau: China the country, rather than its past tradition of looking like a chicken from an aerial view, now promotes the idea that it looks like a woman with a purse (because women are sexy and a purse suggests spending power?).

“Chinese don’t hug, don’t express their feeling verbally in public. No one says, ‘I love you.’”

Ms. Mau: People are not polite in restaurants. It’s down to business. Sometimes you have to yell to order.

婚 = to marry; marriage; wedding; to take a wife
hun1

I mixed these two up as I was creating this, so let’s look at them again:

I mixed these two up as well:

伴 = a partner; companion or associate; to accompany; comrade
ban4

關/关 = mountain pass; to close; to shut; to turn off; to concern; to involve
guan1

(It’s hard to understand the meaning of these characters unless one considers related traditional characters, and then a pattern is able to be seen. Here, for example is the antonym of the above word:

and one can see that they both 關 and 聯 share the silk character 纟 and the child’s hair tufts (really a pre-scientific depiction of un-formed Fallopian tubes): 丱

The difference is that the Fallopian tubes which represent “the gate.” 門 are blocked in guan1, demonstrating that no conception will occur. Therefore the meanings of guan1: to close, to shut, to turn off. This character 聯 includes the ear character on left, whichsuggests that someone is open to suggestions, and the meaning concurs.

開/开 Kai1 = open, turn on (there are those Fallopian tubes again.) This character 廾 means “two hands.’These two hands might even be euphemistic because this character 弉, with two hands at the bot-tom, means “large, powerful, stout, thick” which describes a penis and anything capable of opening gates or vaginas.

开心
kai1 xin1 = to feel happy (literally “open heart”; That’s the official form of “heart” on the right; keep in
mind that major characters have more than one form.)

关心 = care (“closed heart,” perhaps because it’s wrapped up in someone.)
guan1 yin1 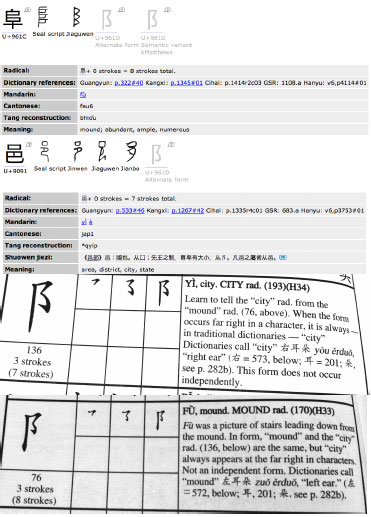 I posted all of these roots in order to understand that “ear” is a euphemism, and this character 那 na4 is more complex than a facial appendage. The right character looks like a “B,”which we now know signifies for breasts, and it means “mound,” “city”( a city is where you would find sex more likely with women than animals). The character at left is aversion of the “moon/flesh” radical. “Those, that” are the way people refer to animals or things that are important to refer to, but not important enough to have a name, and I suspect that this term grew out of the importance of animals that produce milk.

在 = at; in; exist; (before verbs) immediately involved in; right in the middle of doing
zai4

Only the king has jade, and once he has enough jade, he can power a country (note that country has king/jade inside a boundary. It used to have a weapon).

“On the ‘Double nine holiday’ Chinese go high to the top of the mountain to burn incense; also burn in house, kill insects. Children have a letter written on forehead (saying that they are not children?) so that bad evil cannot get to kids.” Anyone else get a better version of this?

中 = within; among; in; middle; center; while (doing sth); during; China; Chinese
zhong1 (my note: China is the center)

(Note: our teacher mixes “yin” and “ying” consistently. Please keep this in mind.)

問/问 = ask (Which gates do you think a person is asking to open?)
wen4

Note the relationship between:

“Sandhi (Sanskrit: saṃdhi[1] “joining”) is a cover term for a wide variety of phonological processes that
occur at morpheme or word boundaries (thus belonging to what is called morphophonology). Examples include the fusion of sounds across word boundaries and the alteration of sounds due to neighboring sounds or due to the grammatical function of adjacent words. Sandhi occurs particularly prominently in the phonology of Indian languages (especially Sanskrit, which has complex sandhi rules), hence its name, but many other languages have it.” — Wikipedia 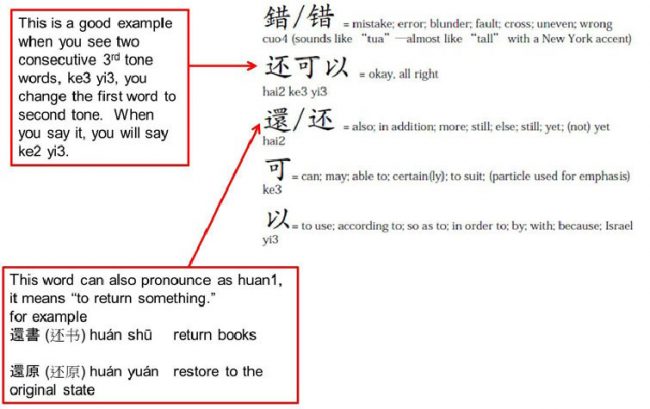 http://en.wikipedia.org/wiki/Mandarin_Chinese_profanity
Chinese characters and definitions from: